Patreon Review: Prayer of the Rollerboys (1990) 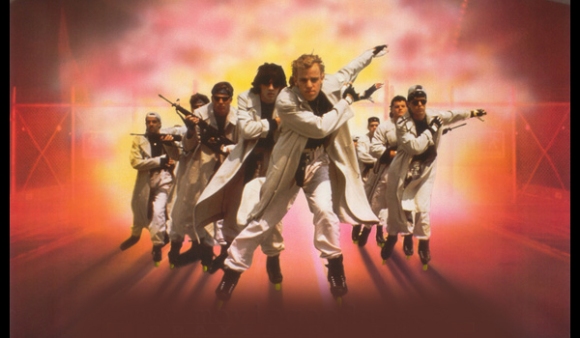 Released in 1990, Prayer of the Rollerboys is a strange beast. A starring vehicle for Corey Haim, it’s a mishmash of tone and contains regular reminders that its director, Rick King, and screenwriter, W. Peter Iliff would go on to work on the screenplay for Point Break.

Set in the what-is-now-not-so-distant future, America has been on its knees for so long, it’s down to its bones. The country’s economy has collapsed and it’s effectively become one big war zone. Filled with poverty, crime and political infighting, the country has left itself open for others to come in and make a tidy profit. Case in point, Japan now owns the ten top US universities and has moved them brick by brick to their own borders. Into this political unrest comes the Rollerboys, a youth movement built to support troubled teens caught in the crossfire of day to day life. Led by the extremely mulleted Gary Lee (Christopher Collet, Sleepaway Camp), the Rollerboys is in fact a white supremacy group (Gasp!) that feeds off the paranoia and displacement of those it takes in.

If you didn’t think you could goosestep in skates, then allow Prayer of the Rollerboys to change your minds.

Our guide in this turbulent time is Griffin, played by the late Corey Ham (The Lost Boys) in one of the few films he made without his contractually obligated partner, Corey Feldman. Looking ten years younger than he’s supposed to be, Griffin is a badass rollerblading pizza delivery boy who has to look after his younger brother, Miltie (Devin Clark), and keep him away from falling under the spell of the Rollerboys.

PLOT TWIST: Turns out Griffin and Gary know each other from way back in the day, and when the former saves a Rollerboy from a crack house fire, he’s invited to join up and spread racial discrimination in the funkiest way possible. Surprisingly, a lifetime membership to the Extreme Sports wing of the Hitler Youth doesn’t appeal to Griffin and he spurs Gary’s advances. When Miltie ends up dealing drugs for them however, Griffin joins up with the police to go undercover, save his brother and take down the Rollerboys.

If it hasn’t been remarked upon enough, Griffin, Gary and all the Rollerboys ride around on skates all the time. In fact, for reasons that are never explained, all the ‘yoof’ get about on rollerblades. Even when Patricia Arquette turns up as an undercover cop, she’s bounding around on wheels. It’s established there are cars, no one seems to be bereft of petrol, roller-skates can neither outrun nor deflect bullets, so why is it a thing? Once you start thinking about, it prays upon you at night.

It’s such a surreal thing to include in the film that it’s extremely hard to take anything that happens seriously. I can’t help but feel that someone saw 2015’s Turbo Kid, despite clearly being a parody, decided they could make a much grittier version, travelled back in time and did so. That might sound like a convoluted way to make film, but I ask you, dear reader, how else you do you explain the rollerblades. How?!

Not that removing the offending foot furniture would instantly up the quality of the film. Prayer of the Rollerboys is the kind of film where you feel every minute of its run time. And it’s only a little over 90 minutes! Like Juno, it has a hipness to it that feels designed by committee.

Despite its insistence that the Rollerboys are the baddies, it’s troubling that the majority of people of colour in the film are there to portray the violent, thuggish B-19s, a rival group that the Rollerboys want to wipe out. Admittedly, being a white supremacist group, they’re unlikely to take on board anyone who doesn’t look like Corey Haim, but that doesn’t refute the acknowledgement that this is an incredibly white film where white people join forces to save the day. In summary, it’s all a bit icky.

Finally, I’d like to acknowledge the glacial romance between Haim and Arquette that is more comical than it is sexy. There’s no denying that Haim had his fans back in the day, but in the cold light of post-90s, but he looks extremely out of depth here and remarkably uncomfortable in his ‘love scene’ with Arquette. You know who was never uncomfortable? Feldman! Just check out the horrendous Busted and how he throws himself into every sex scene in that. The man was insatiable.

A parody of itself before the end credits even roll, Prayer of the Rollerboys is perhaps more interesting in this current climate for its portrayal how a small group of people with conservative leanings can quickly gain control by promising to help the disaffected and poor. Replace the rollerblades for tiki torches and the comparisons become even clearer.

Prayer of the Rollerboys was chosen to be reviewed by one of my lovely Patreons. Thank you for your selection! If you’d like to you’d like to learn more about my Patreon, click the link here.

Freelance writer with an arts and entertainment slant. Over 10 years' experience as editor and proofreader. Based in Melbourne, Australia.